Like much of New York City’s transportation infrastructure, Robert Moses had a hand in the planning and construction of the Brooklyn-Queens Expressway (BQE). The cantilever is the expressway’s most distinctive feature, and was built to conserve space and minimize intrusion in the surrounding neighborhood. It opened in 1954, although the idea dates back the 1820’s with a proposal by Hezekiah Pierrepont to create a private garden looking towards Manhattan to rival Battery Park. Moses would not consent to making the area private, but did ultimately create a public Promenade atop four-tenths of the cantilevered highway.

"This 8-block, 3-level cantilevered structure is significant as an innovative solution for constructing a modern highway while preserving the integrity of Brooklyn Heights neighborhood and preserving area views of Manhattan. The esplanade contributes to the Brooklyn Heights National Historic Landmark District." 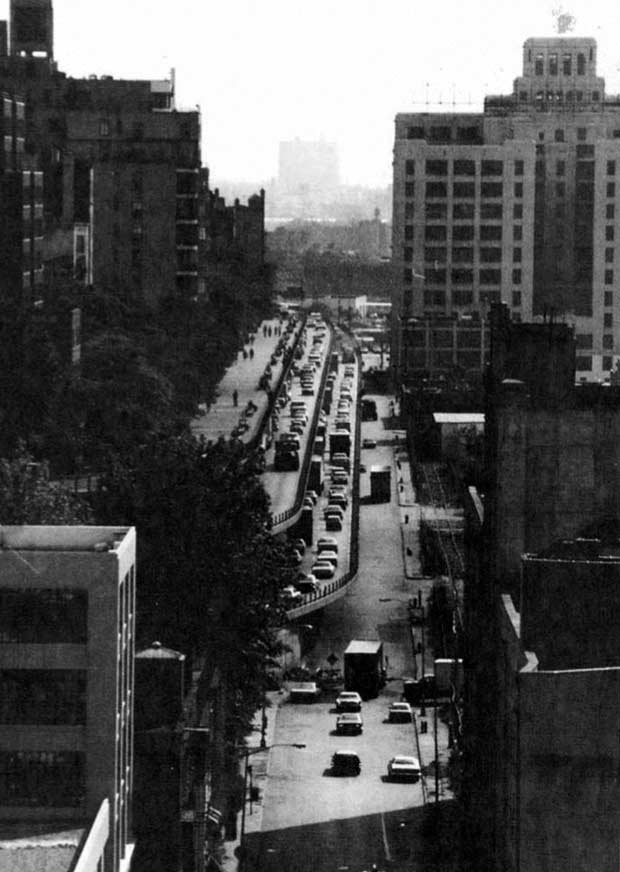 “The 1936 Regional Plan Association recommended the construction of a link between the Gowanus Parkway and the Triborough Bridge. Originally, this plan was devised as an alternative to a competing plan for a proposed Brooklyn-Battery Bridge (which eventually opened as a tunnel in 1950), and included the reconstruction of the Williamsburg, Manhattan and Brooklyn Bridges.

One of the leading developers in New York City, Edward A. MacDougall described the benefits of the proposed highway as follows:

‘By affording an express bypass over congested areas and at the same time easy access to these areas for those who must reach them, this highway will do more to relieve traffic congestion than anything heretofore accomplished. The immediate effects of this highway would be to give Brooklyn direct access to the Triborough Bridge, to the (1939-1940) World’s Fair via Queens Blvd and Horace Harding Boulevard, and to the 38th Street (Queens-Midtown) Tunnel via the Meeker Avenue Bridge and Borden Avenue.’

The future effects of this and other improvements upon the residential and industrial prosperity of Brooklyn and Queens are incalculable, especially those sections already favorably located in relations to the existing parkway s, the Triborough Bridge and rapid transit lines.

In some areas Robert Moses had to make concessions to his original plan. Which included a six-lane open-cut highway bisecting Brooklyn Heights. In response to opposition by community groups an Alternative Plan that proposed a three -decked structure immediately along the Brooklyn Heights waterfront. The structure was to carry three westbound lanes on the lower level, three eastbound lanes on the middle level and a park and promenade on the upper level.”